You may have herd some of the buzz around Bitcoin and blockchain technology. There is a new player in crypto space that could be potentially more disruptive than Bitcoin. Enter Ethereum.

So what is Ethereum? Is it really blockchain 2.0? Is it really going to set the stage for Web 3.0? While both Bitcoin and Ethereum run on a distributed ledger system (blockchain) their purpose is fundamentally different.

Bitcoin is to financial transactions as Ethereum is to law and business logic. While the previous statement is a vast over simplification, it provides a basis to begin to think about the two.

Bitcoin (BTC) was built from the ground up as an alternative to cash, its primary purpose is to store value and securely transact.

Ethereum has been developed as a platform which allows peer-to-peer contracts and applications by its own digital currency (ETH). One way to think about Ethereum is as a global virtual machine. Basically it is a computer that anyone can access and use for anything at anytime for a fee.

What is a Decentralized autonomous organization (DAO)

In this most basic terms a DAO is an organization that has a distinct set of rules or methods of operation. These rules are publicly visible to all and act as smart contracts to determine the behavior of the organization. In other words, a decentralized autonomous organization is an entity that runs on the internet and exists autonomously, but also heavily relies on hiring individuals to perform tasks that the automaton itself cannot do.

Now that you have a basic understanding of what a DAO is, lets think about how it might be applied to asset management.

Image a DAO as an asset management vehicle. Hypothetically if a DAO owned a large commercial asset such as a multi-family building the work of managing the asset could be handled by a DAO.

Revenue
Rent collection and utilities would be handled by smart contracts that tenants could pay online. If there was a failure to pay the contract would automatically contact a collection agency or terminate the lease. After revenue is received the DAO would have a pre-determined logic for exactly how much revenue is allocated to operating costs, taxes and owner dividends etc.

Maintenance
Like any physical asset, maintenance is key to retaining its value. The DAO will allow the owners or investors to have full control over maintenance and building improvements. For example, say every 10 years roof maintenance needs to be performed. The DAO would start a vote for the shareholders to pick a vendor, price and specifications of work needed. Shareholder voting power is determined by their percent ownership of the DAO. After the work was completed to specification, another vote (perhaps with a 3rd party) will approve the work and the funds will be released to the vendor automatically.

Transparency
Because the DAO uses the blockchain to record all transactions and operations there will be full transparency to all owners as to exactly what happened over the entire lifetime of the DAO the underlying assets etc. Like any blockchain this data is cryptographically secure and immutable – thus providing a perfect history of the assets. This level of transparency will align both the tenants, vendors and the asset managers in a way that has never been seen before in property management industry.

This is just one potential use case for a DAO. There are endless possibilities as to what a DAO could do or be. It will be very exciting to see how this new category of organization will grow and interact with the world in the future. 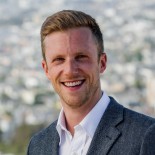 Max Kaplan
Max oversees all technical development and operations that power the Brevitas marketplace. Drawing from over a decade of experience with web technology and real estate, Max has been a key contributor to the platform since its inception. Prior to co-founding Brevitas, Max was CTO at one of San Francisco’s largest privately held real estate investment companies for over eight years.

2016 Is The Year Real Estate Wakes Up To Blockchain